Mixpac Sulzer static mixer MAH 0517-0413T is used to dispense adhesives from 50 ml AA series cartridges - both 1:1 and 2:1 ratios.  These plastic nozzles are disposable and feature a simple twist lock mounting method for attachment to two-component cartridges. This is a hybride mixer made by fusing an 05-17 mixer and an 04-13 mixer, hence the lower half of the mixer has a small ID than the upper half. 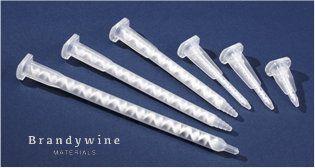 Mixpac nozzle MAH 0517-0413T is used to dispense materials such as epoxy, polyurethane, silicone, acrylic, methacrylate and a variety of other two part adhesives and sealants.